The elbow is quite a complex, tight fitting “hinged” joint made up by the end of the humerus and both the radius and ulna. It is controlled by a number of different muscle groups and its function is fundamental to gait.

There are number of conditions that we see that affect the elbow and lameness as a result of elbow pain is the single most common cause of forelimb problems in dogs. Many of these conditions have some genetic component and they have been grouped together within the umbrella title of elbow dysplasia but it important to remember that the genes responsible for the different causes of elbow dysplasia are separate, some individual dogs may have more than one form of elbow dysplasia present at the same time.

Dogs with Elbow Dysplasia should not be used to breed from.

There are certain sites in the elbow joint that preferentially become damaged:

The first thing to do whatever the age of the dog is to get a diagnosis. It is important that we recognise the disease early as in some very early cases the long term outcome can be changed with appropriate treatment.

Radiographs may have been taken of both elbows, because the elbow is so complex we usually perform a CT scan to confirm subtle changes and the information from the CT scan provides assistance in determining whether further surgery is required and if so to be able to accurately plan for that surgery. However it is important to remember that no one diagnostic tool will give all the information required and so each part of the process should be seen as a part of a complete process to make a diagnosis, determine the extent of the problem and plan for managing the problem.

In most cases the condition will be bilateral ie it is present in both elbows, this can confuse the picture as the true extent of the discomfort causes by the problem may not be apparent and there is often some confusion as to which leg is causing a problem. We would always CT both elbows and because elbow and shoulder problems can mimic each other we often look at the shoulders as well.

Finally to provide a complete evaluation the cartilage of the joint can be examined by arthroscopy, this is usually done at the same time as addressing the condition directly but the arthroscopic procedure should be seen as both a final diagnostic procedure and hopefully a therapeutic procedure.

The most common cause of elbow pain is Medial coronoid disease. The true cause is as yet unknown and is likely to be a complex combination of biologic factors (collagen metabolism, cartilage metabolism, genetic control of bone growth) and mechanical factors which might include relative differences in the growth of the radius and ulna or in appropriate growth of the ulna or abnormalities of “fit” of the radial head into the ulna. What ever the basic cause the result is abnormal loading of the bone of the medial coronoid which results in the development of microcracks across the coronoid rather similar to the radiating shock waves coming out from an earthquake. With time these radiating cracks start to coalesce into a large fissure and eventually the fissure breaks free as a fragment.

These fragments can occur anywhere on and in the medial coronoid but the most common site is the coronoid tip and radial incisures of the coronoid, it is very important to remember though that the cracks will extend across much of the coronoid and so simply removing the fragment alone will leave these at risk areas prone to further fragmentation. On top of the primary bone problems the overlying cartilage can also be variably damaged and worn although generally it is rare for early subchondral bone disease to have extensive cartilage loss. Only arthroscopy can demonstrate the extent of cartilage loss. Coronoid disease is therefore essentially a disease of the bone but one that has a detrimental effect on the cartilage and addressing the primary disease will usually require that some cartilage is sacrificed, making the judgement as to how much cartilage is sacrificed is key to success and we always err on the side of caution.

Some cases that present with just early disease (fissures or fragments without significant cartilage loss) seem to respond poorly to debridement alone and in these cases there has often been a rapid advancement of cartilage wear and loss, some cases present at this stage in the first instance. For these cases we have more advanced surgeries to try and improve outcome as arthroscopic surgery alone will provide little benefit, these surgeries are significantly more invasive than an arthroscopic surgery however and the post operative requirements are considerable and the risks of complication higher.

This is a procedure designed to relieve the pain associated medial coronoid fragmentation where there is extensive loss of cartilage. In these cases the problem has progressed far beyond simple fragmentation of the coronoid and the bone on bone wear caused by the cartilage destruction is a major source of pain and will only otherwise worsen.

The surgery involves replacing the weight bearing surfaces only of the medial (inside) aspect of the elbow where the cartilage has worn out and provides the major benefit of arresting the further destruction, it is however a significantly invasive surgery and so is not appropriate for all dogs. The surgery is only allowed to be performed by surgeons that have attended a course to learn the technique safely and we are currently only one of a few centres in the UK that can offer the technique.

In all cases the long term treatment of osteo arthritis is essential. The use of anti-inflammatory pain killers will alleviate the symptoms of chronic pain and sometimes this can be used in conjunction with other forms of chronic pain relief such as acupuncture. The use of neutraceuticals such as chondroitin and glucosamine is advised. 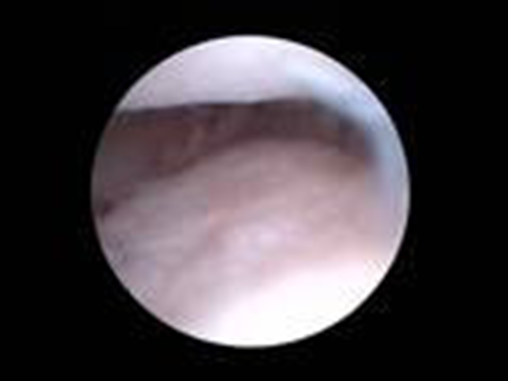 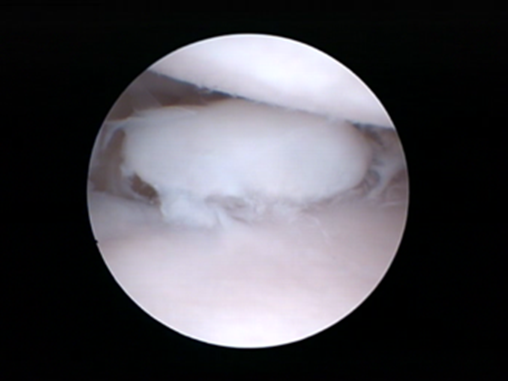 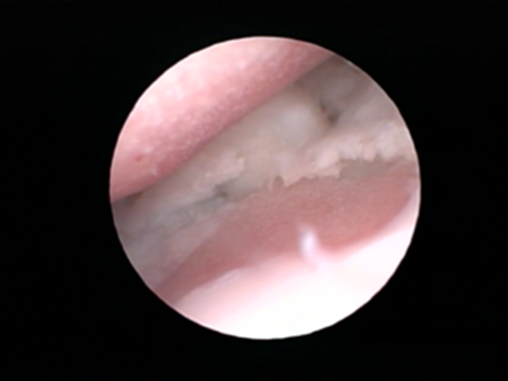 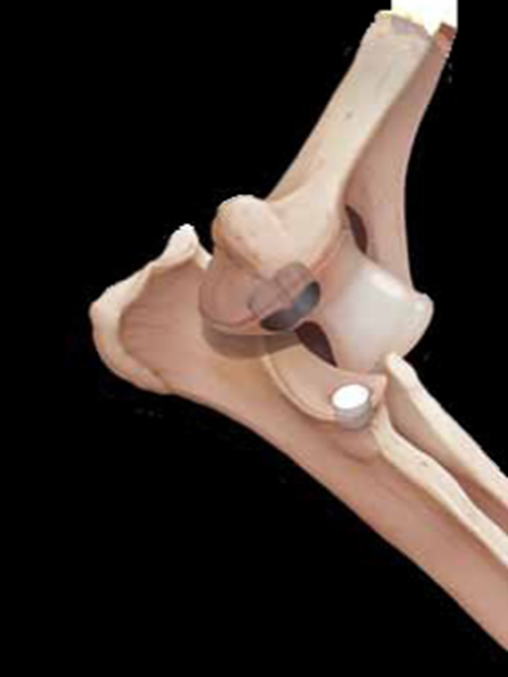 Implants in position in an elbow model (images courtesy of Arthrex)