Lameness as a result of shoulder injury is a common presentation in dogs. Typically the dogs affected are large breed dogs and certain breeds are over represented with Collies and Labradors at the top of the list, however any breed of dog can injure its shoulder and we have seen significant shoulder injuries in small dogs as well as big dogs.

The cause of the injury can be very diverse with some cases presenting after a sudden lameness associated with a single episode such as a fall or colliding with another dog at speed. Most however are either chronic (long standing) weaknesses or repetitive strain injuries where a single action is repeated many thousands of times creating micro trauma to a structure or structures which builds up over time.

The shoulder is on the face of it very simple with the head of the humerus acting as the ball and the glenoid of the scapula the socket for a simple ball and socket joint. Dogs don’t have a clavicle. The simple nature of the bony anatomy means that the stability and function to the shoulder is closely controlled by ligaments, tendons, muscles and the joint capsule and it is injury to one of these structures that is the cause of the lameness. This is important to consider because lameness is often associated with dysfunction, imaging soft tissue structures is more difficult than the bones and healing takes a long time. Typically a bony fracture can heal to the point of vigorous use in 12 weeks, soft tissue injuries will take up to 6 months sometimes.

This can be extremely challenging especially if the lameness is only occasionally. Because the patients are usually middle aged larger breed dogs ruling out elbow problems is also very important. Because the injury is usually to a ligament or tendon there may be no changes visible on an X ray.

The diagnostic process for shoulder injuries follows the same path as any other injury. First and foremost we must get a comprehensive history, this will provide clues as to the cause and also provide important information to help provide advice in the healing phase. Dogs that are in active sporting competition will not recover without a substantial period of rest followed by recuperation and rehabilitation followed by return to training. A major shoulder injury will take a dog out of competition for a year.

The next process is clinical examination and as shoulder injuries will often only cause a low grade lameness most of the time, seeing video of the dog at home when it is lame can be very useful. Specific shoulder structures can be assessed with palpation tests, unfortunately none are specific and most just confirm that it is the shoulder that is the cause of lameness. Ruling out the elbow is important as these two joints can mimic each other and especially in some of the large breed dogs we see.

Once we know that it is the shoulder that is the cause of lameness and we have a fair idea of what is injured then we can think about confirming the diagnosis and so determine a treatment plan by imaging the structures. Traditionally X rays have been used to assess bony structures and in some cases where soft tissues have significantly degenerated and calcified, these changes may be seen on X rays. However in most cases plain X rays don’t help too much and so our protocol is to start with Computed Tomography (CT) in most cases. CT will allow us to see more detail in the shoulder and CT is very useful to rule out the elbow. Diagnostic ultrasound is then hugely beneficial in the shoulder as most of the structures on the side and front of the shoulder can be seen and typically this is done at the same time as the CT, assessing shoulder stability and so the integrity of ligaments under the same anaesthetic plays an important part as well.

Once this is done we would then talk about the results and findings and decide upon the next step, in some cases we can make a diagnosis and start a conservative treatment straight away (such as a minor medial ligament injury) in other cases we may need to image structures inside the joint by arthroscopy and in other cases we may elect to consider arthroscopy for diagnosis and also perform a surgical procedure (reconstruction of a traumatic ligament injury, debridement of a biceps tendon impingement, removal of a fragmented caudal glenoid).

The arthroscopic procedure is done on a different day so that we have an opportunity to discuss the condition and options and also prepare for the post operative management. In some cases we may want to fit your dog into a shoulder support brace in advance of surgery.

In very severe cases shoulder arthrodesis (Fusion) may have to be the only option available. This is clearly a very big undertaking and is a last resort procedure however the surgery and potential for problems has been improved considerably by using CT data and custom made cutting and reduction guides. We are actively working on developing shoulder replacement but this is not yet to a point in which we can use clinically yet (2018).

There are cases where the degree of problem is such that a definitive diagnosis is not made for whatever reason (financial, risk benefit analysis). In these cases we may consider a conservative approach including rest, pain killers and gradual return to function. In some cases we could consider using injection of steroids but although these may provide an immediate benefit through powerful anti-inflammatory function, they may also cause problems in the future.

MRI is a way of assessing soft tissue structures in great detail non -invasively. There are some cases where we may arrange for this to be done, these may include acute muscle injury or if there is a concern for a neck problem such as a disc injury causing shoulder pain or a suspect nerve tumor. MRI requires a long anaesthetic and is usually arranged locally elsewhere.

As already stated these injuries do not heal overnight. The extent of injury present at the outset may also be considerable and so we must have a frank and honest discussion of expected outcome and treatment time scales.

Every case will require at least 6 weeks of complete exercise restriction (by this we mean lead garden toileting only) and in some cases of ligament reconstruction we require some period of caged rest. After 6 weeks of exercise confinement we would typically expect another 6 weeks of gradual build up of lead exercise and then for high performance dogs it will be at least another 6 weeks before active work at a low level can be started.

The involvement of a professional physio (ACPAT Cat A or a vet with further qualification in physiotherapy) is mandatory from day one. The final decision on types of physio is made by the professionally qualified person but free swimming is not allowed for 12 weeks after treatment in all cases as this is quite an uncontrolled activity that can cause reinjury. Swimming forms a part of physiotherapy and so must be directly supervised by the physio. We cannot agree to the use of pools run by the Canine Hydrotherapy Association as we do not recognize this as a qualification in physiotherapy.

Because many of these injuries in high end working dogs and sporting dogs are caused by repetitive strain it is worth considering some of these factors. A strain to a soft tissue structure (ligament or tendon or muscle) will lead initially to damage that can be reversed and healed but when this strain is repetitive there comes a time when the build up of injury and failure of healing will lead to irreversible damage or healing with scar tissue that is easily re injured.

So the injury risk can be reduced enormously by reducing the number of actions or by increasing the rest interval. 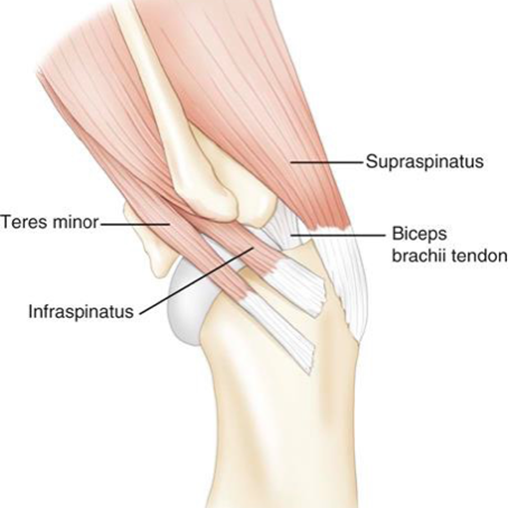 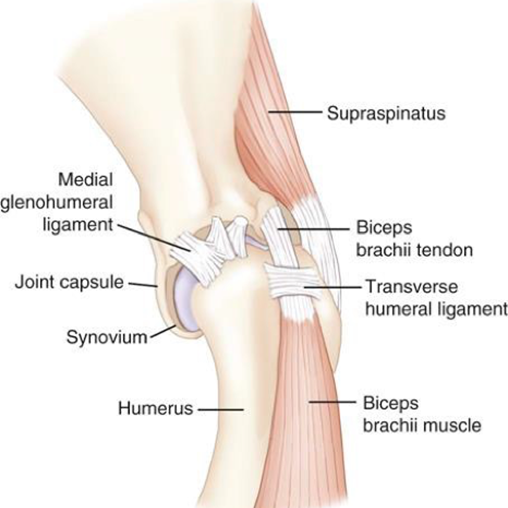 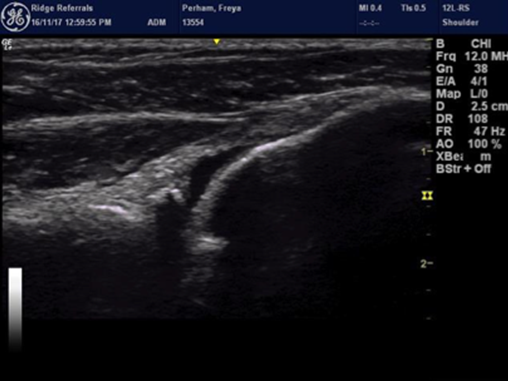 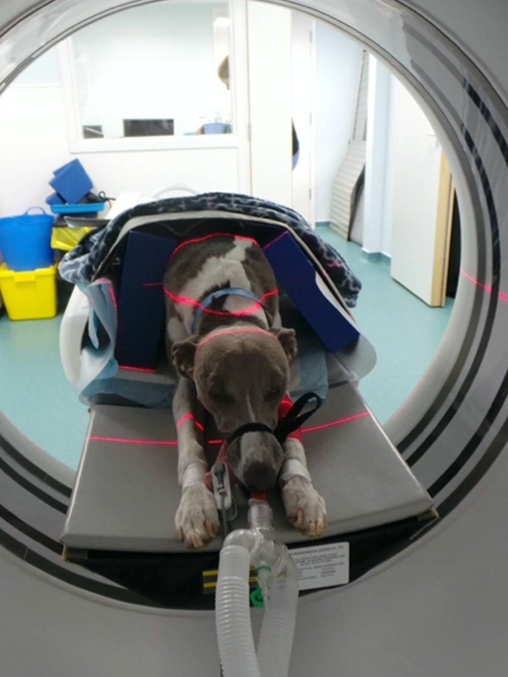 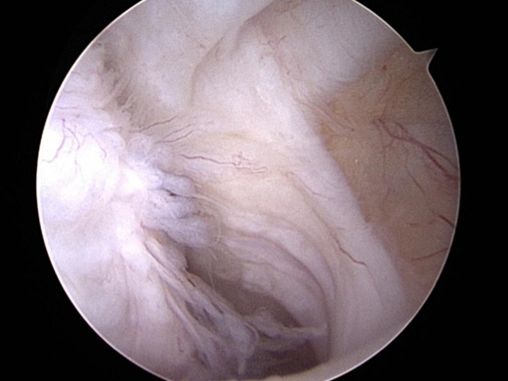 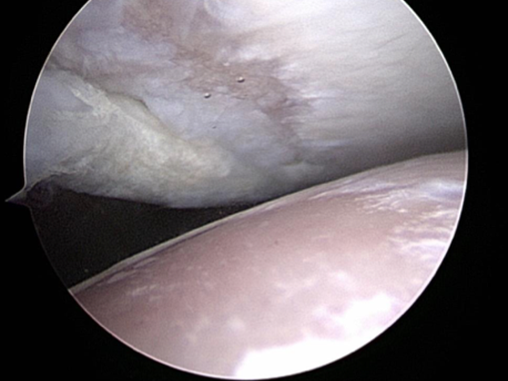 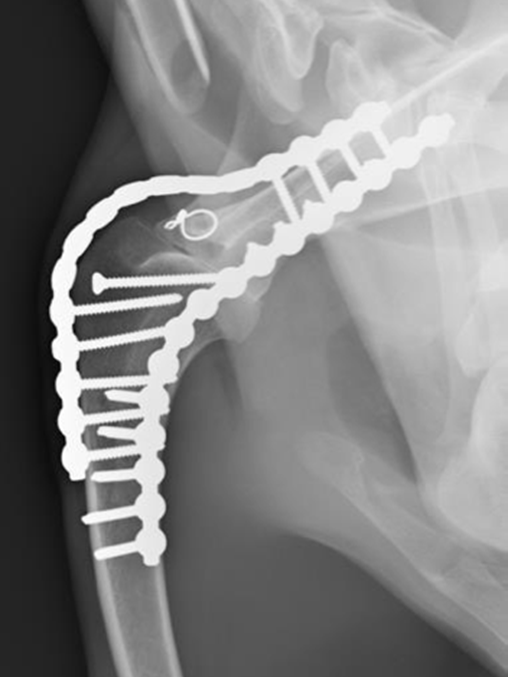 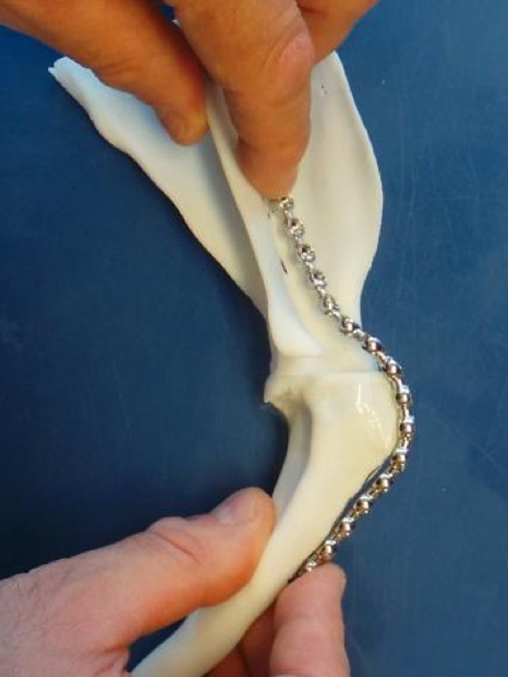 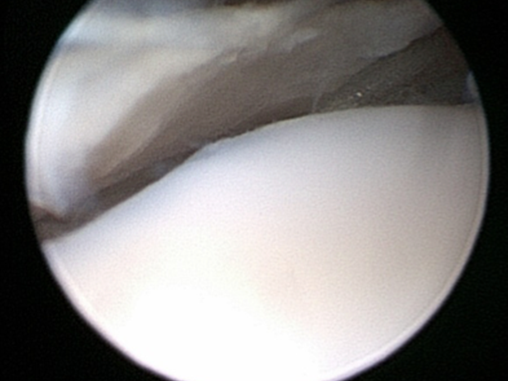 Arthroscopic pictures of an OCD flap in place 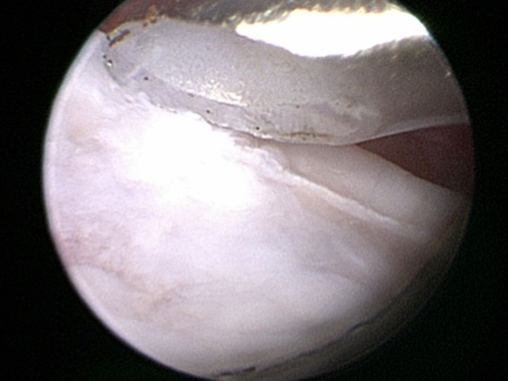 Debridement after the flap has been removed
TOP