The ACP system that we use is originally a human product designed to aseptically harvest platelet rich plasma from people. This system has been modified so that we can apply the same technology to treat dogs. There has been a lot of research in the last five years since we have had the system and there is now good evidence that we can use these products to help manage osteo arthritis and also to encourage healing in a number of other conditions, most notably in shoulder injuries. The theory behind platelet rich plasma or ACP is that the platelets are rich in growth factors and so by concentrating them we can harvest the benefits they have in healing, importantly we believe that minimising the white blood cells is as important as maximising the platelets as these cells appear to stimulate inflammation. We are trying to minimise the bad and maximise the good!

In order to work within strict “evidence based” guidelines we have standardised our collection technique in line with research that was published in The United States by Dr Sam Franklin (2018) which found that the platelet concentration could be improved and the activity maintained using the Arthrex system and anticoagulant and importantly minimise the white cells. Not all platelet rich plasma systems appear to do this, it is for this reason that we have chosen and stuck with the Arthrex ACP system.

The process involved requires that we collect 20ml of blood aseptically, this does require that we need to clip some hair from your dog’s neck and this is best done under deep sedation just prior to using the ACP, in some dogs the repeated clipping can cause a skin rash and so we will often send dogs home with some cream to prevent this rash from developing.

We typically will collect all the samples needed for the complete treatment and process all samples at the same time. Those that are not needed for the first treatment are then aseptically frozen for use in the future. 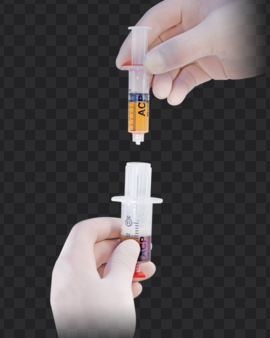